We’ve officially made it to the second consecutive event of an insane week of fights that will be capped off on Saturday, with UFC 200! Top to bottom, this card has […] 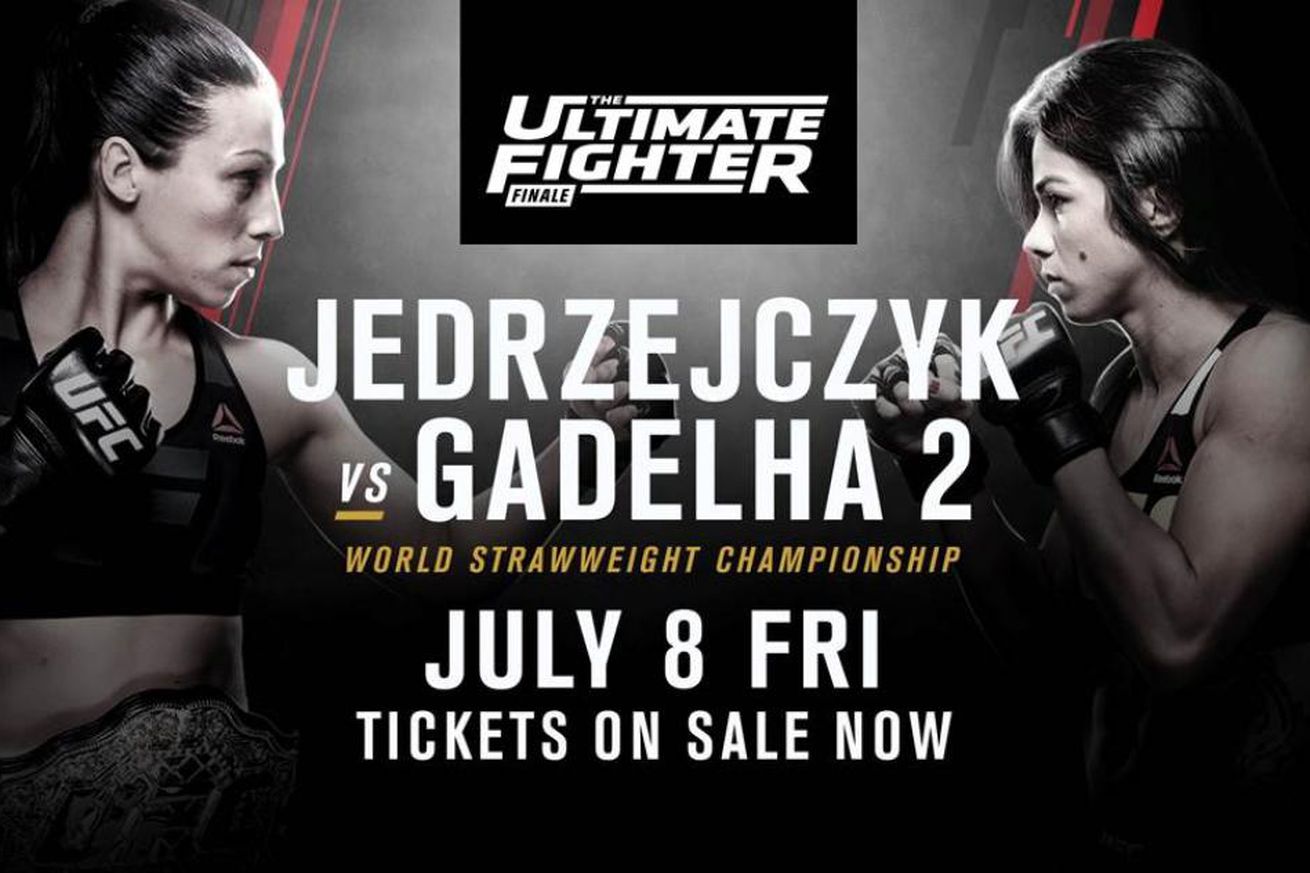 We’ve officially made it to the second consecutive event of an insane week of fights that will be capped off on Saturday, with UFC 200! Top to bottom, this card has some good fights and definitely a bunch of notable fighters. Headlining the event, is a rematch between Women’s Strawweight Champion Joanna Jedrzejczyk and challenger Claudia Gadelha. Last time these two fought, Jedrzejczyk squeaked out a split decision victory, one in which many believe that Gadelha had one. Either way, it was a close fight and it planted the seed in what has been a rather heated rivalry.

In the co-headliner, it will be the TUF 23 Light Heavyweight finale, between Andrew Sanchez and Khalil Roundtree. There will also be a TUF 23 Strawweight finale between Amanda Cooper and Tatiana Suarez. Unfortunately, I didn’t watch a single episode of the ultimate fighter this year, so shame on me.

Some notables on the card include former UFC Lightweight challenger Gray Maynard making his featherweight debut, as well as the debut of former Bellator Lightweight kingpin Will Brooks against the veteran Ross Pearson. Also former UFC Flyweight challenger John Moraga returns to action and Doo-Ho Choi and Thiago Tavares square off in an awesome fight in the Featherweight division. Anyways, let’s just get to the predictions!

115 lbs.: UFC Strawweight Champion Joanna Jedrzejczyk vs. Claudia Gadelha – Five rounds of elite action in the Women’s Strawweight division! The Champion Joanna Jedrzejczyk looks to defend her belt for the third time, as challenger Claudia Gadelha looks to exact revenge and take home the belt. Jedrzejczyk is a scary striker, like I think she probably destroys some men in sparring. I think her wins against Carla Esparza and Jessica Penne were some of the most brutal fights, as her hand speed and accuracy was off the charts. These other women are not even in the same ballpark as her striking. As for her opponent, Gadelha is mainly a grappler. She has suffocating top control and a knack for submissions. As for a the fight, Jedrzejczyk has the clear striking advantage and probably has fined tuned her takedown defense in preparation for this fight. Gadelha is not a great striker, but is serviceable and you know she’s going to be looking for the takedown all fight. I really want to say Jedrzejczyk, but I feel as if Gadelha might be able to grind her in a five round fight. Then again, if I recall Gadelha was gassed in their first fight after two rounds. Ahhhhh – Whatever, let’s just go with Gadelha to shock and win the Women’s Strawweight belt…

205 lbs.: Andrew Sanchez vs. Khalil Rountree (TUF 23 Light Heavyweight Final) – Another one of these fights in which I have no idea who they are becuase I missed TUF this season – ughh! I see Sanchez fought Kevin Casey and beat a guy named Clinton, which is good enough for me to pick him via TKO.

115 lbs.: Amanda Cooper vs. Tatiana Suarez (TUF 23 Strawweight Final) – I didn’t watch a single episode of TUF, so this is embarrasing, but I’m going to go with Tatiana Suarez simply because it’s a fun name to say. Kind of like Francisco… Anwyays, Suarez via decision.

155 lbs.: Ross Pearson vs. Will Brooks – The debut of former Bellator Lightweight Champion Will Brooks in the UFC has been something I have been waiting for, even before he was released by Bellator. I feel as if, the UFC found themselves and instant contender and with Former Bellator Lightweight Champion and now newly crowned UFC Lightweight Champion Eddie Alvarez capturing the belt, they have a story line. Anyways, I’ll save that for another time and just get right into this. Brooks brings a well diverse game, that includes ever improving striking and highly superior wrestling and top control. Pearson on the other hand is a striker and a technical one at that. He also carries legit power, but he settles to pick you apart more so then knock you out. He’s not a grappler and has struggled in the past with them. Now, he’s shored up his takedown defense, but Will Brooks is just extraordinary grappler and I have a hard time believing he won’t be take down Pearson. Matter of fact, I think Brooks does at will and eventually will find his neck and win via submission. So I got “Ill” Will Brooks to win in his UFC debut via submission.

145 lbs.: Doo Ho Choi vs. Thiago Tavares – What a fight! Here’s my pick for fight of the night, as the standout striker from Korea looks to keep him perfect 2-0 record inside the octagon against the gritty Thiago Tavares. Doo Ho Choi’s game is no secret, he comes to knock you out with his technical, yet powerful strikes. Tavares is well rounded, but would rather get this fight to mat via his superior grappling, where he will look to maintain top control while pursuing submissions. Normally I favor grapplers and Tavares has all the tools to grind this one out, but I’m going to ride the wave of the one they call “The Korean Superboy”. I think he keeps this one on the feet and picks apart Tavares and eventually finishes him in the third round. Choi via TKO.

155 lbs.: Joaquim Silva vs. Andrew Holbrook – Although I didn’t think Holbrook beat Ramsey Nijem, he showed toughness and definitely some promise. Which, is enough to make me pick him here against the Brazilian Joquim Silva… Holbrook via deicison.

145 lbs.: Gray Maynard vs. Fernando Bruno – How the mighty have fallen, as Gray Maynard will look to five consecutive defeats. I’m not sure who this Fernando Bruno cat is, but I have a feeling that he is a sacrificial lamb to try and somewhat revive Gray Maynard’s career. Well maybe not revive, but definitely end the suffering. So with that, I got Maynard via decision.

125 lbs.: John Moraga vs. Matheus Nicolau – Man, the flyweight division has no depth. First they feed Geane Herrera to former UFC Flyweight challenger Ali Baugatinov and then they do the same thing to this poor kid Matheus Nicolau. Ehh – Moraga via TKO.

185 lbs.: Cezar Ferreira vs. Anthony Smith – Fun fight in the middleweight division, as Vitor Belfort’s prodigy Cezar Ferreira looks to push his winning streak to two. Meanwhile, Anthony Smith has won eight straight bouts heading to this and recently made a successful return to the UFC, defeating Leonardo Guimaraes via decision. As for the fight, both men are primarily strikers, but Ferreira chin always worries me. It worries me so much that I dare not to pick him. So I got Smith staying hot and putting away Ferreira via TKO.

205 lbs.: Joshua Stansbury vs. Cory Hendricks – Who and Who? Man the UFC has so many fighters on their roster that even a die-hard fan like me doesn’t even know who these guys are. So, I’m going to just predict that the one they call “The Sandman” wins via decision.

155 lbs.: Jake Matthews vs. Kevin Lee – Man this is a great fight, although it will hurt to see one of these young prospects suffer a setback. Anyways, Matthews last fight has me buzzing about the young lightweight. He handily was able to defeat an offensively diverse Johnny Case. And Lee is not the striker Case is, so he will need to use his physical and athletic abilities to close the distance and take him down. Even that I’m unsure Lee can do, as Matthews is just really coming into his own and it’s honestly hard not to pick him here. So with that, I’m going to predict that Matthews edges out Lee via decision.

170 lbs.: Li Jingliang vs. Anton Zafir – I don’t know too much about Mr. Zafir, other then he’s in for a rough night against the “The Leech”. I foresee Jingliang controlling this fight wherever he wants and using his legit power to finish off at some point in the fight. I got the Chinese superstar Li Jiangliang via TKO!