The UFC is back in action, as the promotion heads to Liverpool, England. The UFC has hosted many of events in England, but this will be their first visit to […] 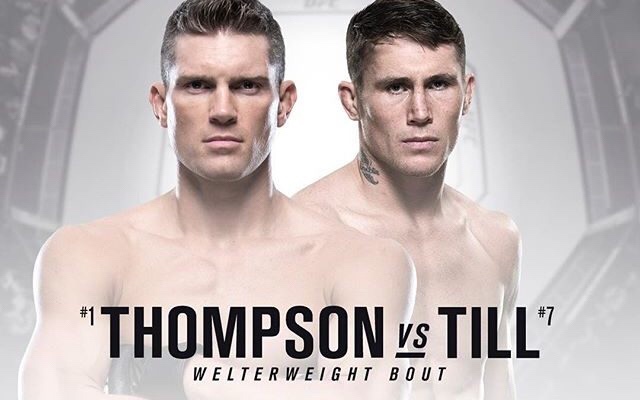 The UFC is back in action, as the promotion heads to Liverpool, England. The UFC has hosted many of events in England, but this will be their first visit to Liverpool. Originally, this Fight Night was targeted for Dublin, Ireland. However, after Liverpudlian Darren Till shocked Donald Cerrone via knockout, the UFC saw a superstar who could tap into this local market. So, headlining the card is no other then rising superstar Darren Till and the two-time Welterweight title challenger Stephen Thompson.

Till, heads into this bout undefeated. In five fights in the UFC, he’s won four of them and the other was a draw. Surprisingly, the Donald Cerrone marked only his second finish inside the octagon, as well as the only one in the first round. As for Thompson, since losing narrowly via decision to Tyron Woodley in their title fight rematch, he’s battled some injuries that have only allowed him to fight once. The one fight though, was a rather convincing win over Jorge Masvidal. Now, in order to prove he’s worthy of the title again, he must first go through a rising superstar.

Enough talk, to the Predictions!

170 lbs.: Stephen Thompson vs. Darren Till – The motherload! The anticipation for the fight was killing me, but finally it’s here. The only thing sort of dampening it though, is Till’s failed weight cut. It’s sort of a bad sign, that he’s just too big for the weight class and he’s killing himself to get down to this weight. Nevertheless, as long as he weights in at the maximum of 188 lbs. on fight night, then the fights a go. If not, then the UFC will take a major dump on their specifically Darren Till targeted event in Liverpool, England.

Anyways, as for the fight, I have Thompson. Even before the weight cut, I had Thompson. While Till’s confidence is oozing and he backed it up against Cerrone, this fight is just too much too soon. Thompson a year ago was fighting in his second world title fight, while Till was fighting Jessin Ayari and Bojan Velickovic. Not exactly household names. And while Till is an exceptional talent on the feet, it’s Thompson karate style that is going to give Till problems. And for me, it’s how long will it take for Thompson to put away Till. I say the 4th round. So with that, I have Thompson via TKO.

170 lbs.: Neil Magny vs. Craig White – No clue who White is, but kudos for stepping up. Anyways, Magny via submission.

145 lbs.: Arnold Allen vs. Mads Burnell – Allen is a talent and Burrell is just fodder to elevate the young Featherweight to notoriety. So with that, I have Allen via submission.

170 lbs.: Makwan Amirkhani vs. Jason Knight – Talk about two fighters who started their UFC careers with tremendous fights and wins. From out of nowhere, they became potential stars and even possible title challengers. Then, the floor caved in.

Amirkhani began his UFC career with an 8 second flying knee knockout, followed by a first round submission victory in 2015. Since then, he’s only fought twice. Winning a lackluster fight against Mike Wilkerson and losing via split decision to a very talented Arnold Allen. As for Knight, while he didn’t win his debut against Tatsuya Kawajiri, he made up for it with four consecutive victories. Of those four victories, he earned three bonuses and the moniker of “Hick Diaz”. However, Knight’s accession was too quick, as perennial top ten Featherweight Ricardo Lamas knocked him out. Then, rather unknown Gabriel Benitez tore him on the feet.

In other words, this is a crossroads fight for both men. A must needed victory to propel themselves back into the spotlight is here for the taking. And in my opinion, it’s Amirkhani who gets the job done. His superior wrestling abilities combined with his supposed improved cardio should get him the nod here via decision.

170 lbs.: Claudio Henrique da Silva vs. Nordine Taleb – Silva’s last victory was over top ranked Leon Edwards. That was 42 months ago. Now, he returns to the octagon against a massive and streaking welterweight in Taleb. Silva is rather one-dimensional, seeking the takedowns and working from top control to get a submission. That won’t work in this fight though, as Taleb is a solid wrestler and grappler. He also should undoubtedly hold a strength advantage that will aid fending off Silva’s takedown attempts. On the feet, it’s all Taleb. So with that, I have Taleb winning via late stoppage.

185 lbs.: Eric Spicely vs. Darren Stewart – Either Stewart knocks out Spicely or Edwards for the third consecutive times succumbs via submission. I’m going with the latter, as Edwards grappling is a major hole in his game. Spicely on the other hand lives off his grappling and will do so here again, as he snaps his two fight losing streak via submission.

185 lbs.: Tom Breese vs. Daniel Kelly – I’m almost tempted to pick the 40 year old Kelly, but this matchup is against another powerful striker. You know what though, I’m going to say that Kelly makes this a sloppy and close fight. However, it’s Breese who walks away with a split decision victory.

135 lbs.: Lina Lansberg vs. Gina Mazany – While Lansberg is definitely the better striker, her grappling woes are problematic. She often finds herself against the cage, fending off takedowns and then the majority of the round on her back. I expect more of the same, as Mazany takes this via decision.

170 lbs.: Brad Scott vs. Carlo Pedersoli Jr. – Scott’s mediocre at best, but since I don’t know much about Pedersoli Jr., I’ll just go with Scott via decision.

125 lbs.: Molly McCann vs. Gillian Robertson- No clue… I guess the fellow Liverpudlian McCann via decision.

185 lbs.: Trevor Smith vs. Elias Theodorou – The one they “Hot Sauce” has been a nice run recently, winning three of his last four fights. Smith has relied heavily on his wrestling and grappling to win fights. However, against a fellow wrestler and grappler such as Theodorou, I’m positive he won’t have as much success as he did in his victories. In fact, I believe Theodorou neutralizes Smith’s wrestling. On the feet, neither are good, but Theodorou might have the edge on volume.

As for a prediction, I have Theodorou. I believe he pins Smith to the cage and grinds his down for three rounds. Smith’s cardio has always been suspect, so even if he finds success early, it’s the fresher Theodorou who will take over the later rounds en route to a decision victory.