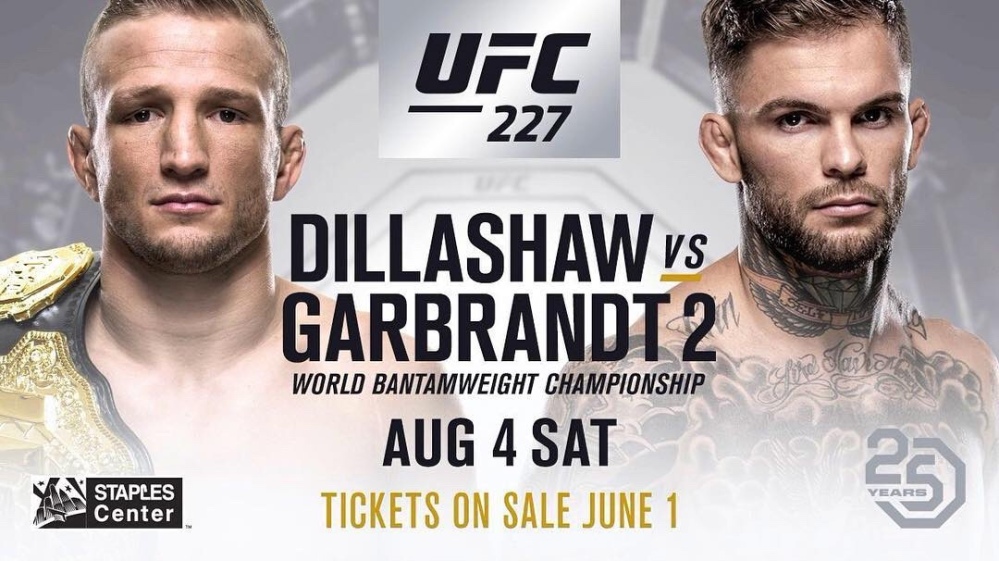 The UFC is back in action with a top heavy PPV event. Headlining the card is a rematch of a rivalry between UFC Bantamweight Champion T.J. Dillashaw and Cody Garbrandt. A rivalry of former teammates, turned enemies. In the first fight between the two, it was Dillashaw who drew first blood. A perfectly timed head kicked would rock Garbrandt, but a minute later a right hand followed by ground-and-pound would turn the lights off. Dillashaw dethroned then Champion Garbrandt, igniting the fire of a rivalry that seemingly and could very well see a trilogy. However, Dillashaw could end this chapter tonight.

Also on the card, UFC Flyweight Champion and consensus pound-for-pound fighter Demetrius Johnson locks horns in a rematch against Henry Cejudo. Johnson, looks to extends his record breaking title defense streak to twelve. Meanwhile, Cejudo gets a second chance to shock the world.

Enough Talk, to the Predictions!

135 lbs.: UFC Bantamweight Champion TJ Dillashaw vs. Cody Garbrandt – If these guys fought 100 times, it would honestly probably be close to a 50-50 split. I mean, Garbrandt has legit knockout power, which is aided by his footwork, head movement and overall quickness. He’s also a solid wrestler, but I don’t expect to see any of that given this rivalry. Dillashaw on the other hand has some of the best unconventional movement in mixed martial arts. His faints and footwork aid his unpredictability on the feet. Tie that in with his dynamic striking game that features potent head kicks and he’s a problem for anyone. I mean, you saw that first hand in the first fight against Garbrandt. Dillashaw can also wrestle his ass off, but again I don’t expect any of that unless someone gets rocked.

Anyways, I feel like this is going to be a five round battle. And given Dillashaw’s dynamic striking, I think leg strikes are going to make the difference. Garbrandt can disrupt rounds though if he can drop Dillashaw several times like he did against Dominick Cruz. That could very well happen, but Dillashaw is weary of his power. I think he keeps more distance this time and fights on the outside, avoiding the brawl. After five hard fought rounds, it’s Dillashaw who I believe will retain via decision.

125 lbs.: UFC Flyweight Champion Demetrious Johnson vs. Henry Cejudo – I don’t see where exactly Cejudo holds any edge in this bout except maybe power? I don’t expect this fight though to end as quick as it did last time. Instead, Cejudo will make it to the Championship rounds and will fade out in the 5th. That’s when Johnson will pounce with something spectacular. Perhaps a cartwheel kick, followed by lion-like leap to grab a rear-naked-choke? Sure. So with that, I have Johnson via submission.

145 lbs.: Renato Moicano vs. Cub Swanson – Moicano has contender written all over him. However, I feel like stylistically this could be a fight in which both counter punchers stare at each other for long periods of time. Or Swanson could come out reinvented and go right at Moicano. Or Moicano can throw his patented leg kicks and slowly wear down the striking attack of Swanson. Honestly, I don’t know, but given Swanson’s recent lumps, it’s do or die for him. This is a must win in order to stay in the title picture, one in which recent and old talent is flooding. With his back up against the wall, I got Swanson finding a way to win this via decision.

115 lbs.: J.J. Aldrich vs. Polyana Viana – Viana has an excellent ground game, but I believe Aldrich has good enough takedown defense to keep this upright. From there, it’s all Aldrich. So with that, I have Aldrich via decision.

185 lbs.: Thiago Santos vs. Kevin Holland – This is a rude awakening to the UFC for Holland. Santos throws everything with fight ending intentions. Holland on the other hand doesn’t. In what should be a firefight of a first round, it’s Santos who will escape with the knockout victory.

135 lbs.: Pedro Munhoz vs. Brett Johns – Johns is a solid fighter, but this is simply a bad matchup. Munhoz, is the complete package. He has excellent cardio, a fast pace, throws strikes in volume, can wrestle, is an excellent grappler and locks down submission when they are presented. The one blemish is his striking defense, but he’s young. Against Johns, he could conceivably get cracked, but I don’t see it. So with that, I have Munhoz via decision.

135 lbs.: Ricky Simon vs. Montel Jackson – Simon was pretty lucky to win his debut, but he does looks to be a solid addition at Bantamweight. Given that I have no clue about Jackson, it’s Simon who I have winning via decision.

135 lbs.: Kyung Ho Kang vs. Ricardo Ramos – This is an awesome fight, but I’ve got Kang edging it out. Ramos has been on a roll of late and his striking has begun to evolve. Considering his submission prowess when the fight hits the mat, a striking game could open the door for Ramos to be a player at Bantamweight. However, his grappling still needs some work and against a massive wrestling heavy opponent like Kang, it’s going to be exploited. So with that, I have Kang using his strength to bully Ramos for three round en route to a decision victory.

145 lbs.: Sheymon Moraes vs. Matt Sayles – No clue who Sayles is, so I got Moraes via decision.

125 lbs.: Alex Perez vs. Jose Torres – Honestly, I don’t know. Torres was pretty hyped coming in, but his debut wasn’t particularly an indicator that he’s for real. I mean, Torres was losing his debut up until his opponent knocked himself out trying to slam him. Nevertheless, it’s a UFC victory. As for Perez, he has two UFC victories, both coming via impressive showings. Considering the hype of Torres, it’s possible pressure, short notice and UFC jitters played factors in his debut. So with that, I’ll go with the notion that we didn’t see the best of Torres and that he will show up here, winning via decision.

115 lbs.: Danielle Taylor vs. Weili Zhang – Taylor’s output is so lackluster, that Zhang can win this by landing only 30 strikes. Seriously. So with that, I have Zhang via decision.

135 lbs.: Wuliji Buren vs. Marlon Vera – This seems like a gimme fight for Vera. All Buren offers is a semi okay wrestling game, but even if he does take Vera down, he has to deal with a dangerous guard game. On the feet, Vera holds a significant advantage. So with that, I have Vera winning via submission.