This card has been through the ringer, as seven fighters pulled out of bouts mainly due to injuries. The injuries resulted in a cancellation of two fights, three replacements sought […] 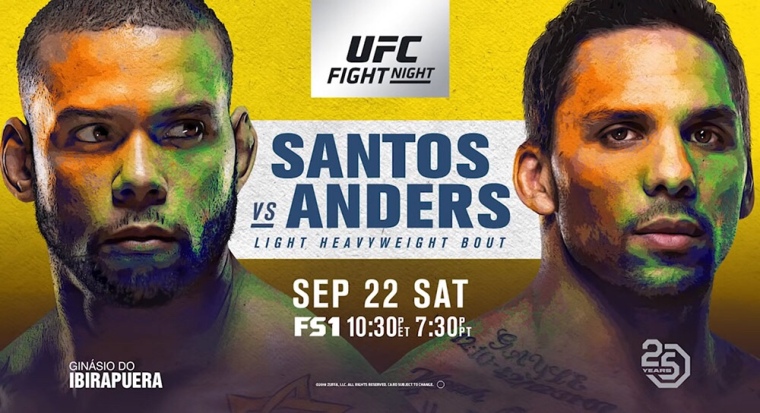 This card has been through the ringer, as seven fighters pulled out of bouts mainly due to injuries. The injuries resulted in a cancellation of two fights, three replacements sought and a brand new main event. Thankfully, the card has finally arrived and it has the looks and feels of a Strikeforce card that featured many mismatches. Those cards resulted in finishes galore, which is what I am expecting come fight night.

Anyways, to the predictions!

205 lbs.: Thiago Santos vs. Eryk Anders – Both men are Middleweight’s, but this contest will take place at Light Heavyweight given all the changes to the main event. The extra 20 pounds is actually a great thing for both men and the fans, as neither had to cut weight and deplete themselves. In what should be another first round fight, It’s Anders I have winning. Santos is a killer on the feet. He’s got knockout power and his leg kicks are just as devastating. However, I just have this feeling that Anders comes out early and takes him down. From there, heavy ground-and-pound leading to a TKO stoppage.

170 lbs.: Alex Oliveira vs. Carlo Pedersoli – This should be a fun fight early, but this will ultimately be too much for the short notice replacement Pedersoli. He’s yet to be finished, but I think that changes. Oliveira is too dynamic and is a bonafide finisher. So with that, I have Oliveira winning via submission.

205 lbs.: Sam Alvey vs. Antonio Rogerio Nogueira – Oof. This either ends in the first round or it’s a staring contest between two counter punchers for three rounds. Given Nog is 90 years old and based on his disintegrated chin, I would venture to guess it ends in the first. So with that, I have Alvey winning via knockout.

135 lbs.: Renan Barao vs. Andre Ewell – Honestly I don’t know. Barao is a shell of himself, which is crazy to think given he’s only 31 years old and only four years removed from being the potential pound for pound best fighter. Now, he can’t even make weight and is essentially a punching bag for every opponent. With all that said, I’ve got Barao via decision. Ha! I know nothing of Ewell, but I hear he’s fast and keeps his hands low. The last part gives me pause, as Barao still has the power to disrupt any fight. Anyways, I got Barao via decision.

115 lbs.: Randa Markos vs. Marina Rodriguez – Markos has alternated wins and losses in her last twelve fights. Literally, she has won one, lost one. Considering she’s on a loss, she’s due for a win. All joking aside, I think Markos gets it done. Her ever improving striking along with sneaky good grappling makes her a tough out for any opponent, let alone a debuting foe. So with that, I believe Markos gets back on track via decision.

155 lbs.: Evan Dunham vs. Francisco Trinaldo – Dunham is a good fighter and I can’t help but to think what kind of path he’d a been on had he gotten the decision win over Sean Sherk. Anyways, I have Trinaldo. He’s got legit power in his hands, he’s a solid grappler with excellent takedown defense and surprisingly his gas tank ain’t half bad for an old man. I expect him to hurt Dunham early on the feet and lock up a submission victory.

205 lbs.: Luis Henrique vs. Ryan Spann – Henrique is a big boy, so for him to get down to Light Heavyweight should exponentially give him a strength advantage over most opponents. Given his grinding style, I like him over the debuting striker Spann. I’m thinking decision win.

265 lbs.: Augusto Sakai vs. Chase Sherman – This ends early and in a knockout. Given Sherman’s porous striking defense, I have Sakai getting the job done here.

170 lbs.: Sergio Moraes vs. Ben Saunders – Fun fight, but I honestly don’t trust Saunders chin or his ability to take punishment anymore. Moraes might not give off the presence as a knockout artist or even a striker, but he’s got a sneaky overhand I can envision giving Saunders loads of problems. So with that, I have Moraes winning via knockout.

125 lbs.: Marya Bueno Silva vs. Gillian Robertson – No clue, but Robertson has been on a roll, especially with submissions. I’ll side with momentum here and say she gets it done via submission.

185 lbs.: Thales Leites vs. Hector Lombard – This is a toss up, but I’ve got Lombard. Both men have shorty gas tanks and well past their primes. Lombard is impossible to take down and he still has ridiculous knockout power. Leites is a grinder, but his gas tank of recent hasn’t allowed him to go along with that game plan. In what should be a quick fight, I have Lombard winning it via knockout.

170 lbs.: Elizeu Zaleski dos Santos vs. Luigi Vendramini – Unfortunately Belal Muhammad dropped out due to injury, so Vendramini will make his sacrificial debut. The dynamic striking of dos Santos ends this one early via knockout.

115 lbs.: Alex Chambers vs. Livia Renata Souza – Poor Chambers. Souza is massive for the weight class, shes better everywhere and undoubtedly has the ability to control where this fight goes. I don’t expect any debut jitters, as Souza easily gets it done via submission.