The UFC train keeps on moving, as they continue their global expansion by heading to Prague, Czech Republic for the very first time. Headlining the card is two rising Light […] 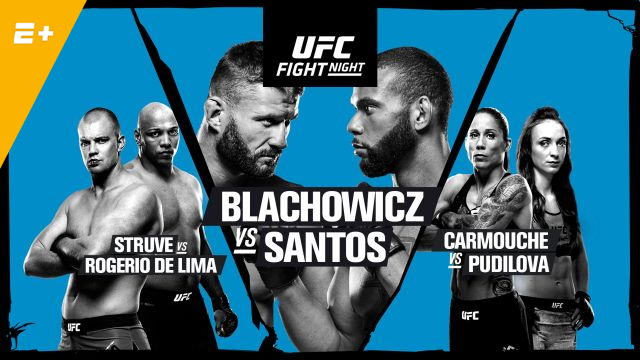 The UFC train keeps on moving, as they continue their global expansion by heading to Prague, Czech Republic for the very first time. Headlining the card is two rising Light Heavyweight contenders in Jan Blachowicz and Thiago Santos. Blachowicz has won four fights in a row, which is crazy given he lost four of his last five previous to the winning streak. The blame for those losses stem from a lack of takedown defense, as he was taken down a combined 11 times in three of the bouts. However, Blachowicz has vastly improved with really good takedown defense and good wrestling abilities to go with it. On the other hand, Santos too has been on a tear. The former Middleweight threat, has won three fights in a row and seven of his last eight fights. With the exception of one fight, Santos has viciously finished six of those foes.

Even though fight is going under the radar, it’s a very important fight at Light Heavyweight. I mean, given how shallow it is, there’s a real possibility the winner could align themselves into a title shot with a victory. At the very least, a number one contenders fight would definitely be in the cards for the winner.

Anyways, to the Predictions!

205 lbs.: Jan Blachowicz vs. Thiago Santos – I must say, this is a really good fight between two fighters who are surging. Blachowicz has won won four fights in a row, with some notable wins over the likes of Jimi Manuwa, Nikita Krylov and Jared Cannonier. Before this winning streak, Blachowicz had lost four of his last five fights and probably kept his job in the UFC due to the shallowness of the division and his debut knockout over top ranked Ilir Latifi.

As for Santos, the former Middleweight is riding a three fight win-streak, with two of them coming in the Light Heavyweight division. A fresh face in the division, Santos has already climbed the ranks quickly by disposing Eryk Anders and Jimi Manuwa via knockouts. The Brazilian powerhouse has some of the most feared leg strikes in the game and his overall power and athleticism is scary for any foe.

In my opinion, Santos has the better chance of winning this fight due his sheer power and violence wherever the fight goes. But, Blachowicz has gone from a striker with zero takedown defense, to a dam good wrestler during this four-fight win streak. Given he’s already eaten strikes from the likes of Jared Cannonier, Alexander Gustafsson and Jimi Manuwa twice, I like his chances to survive the early storm. I believe Blachowicz will mix in striking and wrestling, tire out Santos and eventually submit him late in the fight.

265lbs.: Stefan Struve vs. Marcos Rogerio de Lima – Honestly, how can you be seven feet tall, with an 84 1/2 inch reach and not have a jab…Struve. I mean, talk about a guy who literally has a significant height and reach advantage every single fight and fails to utilize it. So frustrating! Anyways, de Lima has the aggression, power and just enough cardio to get end Struve’s night very early. In fact, Ill go with that…de Lima via knockout.

205 lbs.: Gian Villante vs. Michal Oleksiejczuk – If Oleksiejczuk can survive Khalil Rountree, I think he’s pretty safe against Villante. I just feel that Villante hasn’t evolved, as his offense is pretty predictable. Simple combos with a power right hand. Villante also has pretty crappy cardio. So with that, I have Oleksiejczuk winning via decision.

125 lbs.: Liz Carmouche vs. Lucie Pudilova – Carmouche is going to overpower Pudilova with a heavy dose of wrestling and top control. In the end, Carmouche grinds this one out via decision.

135 lbs.: John Dodson vs. Petr Yan – This is a fun fight and in my opinion, a really big jump up for Yan. I believe he’s got all the talent to eventually be a title contender, maybe even a champion. However, he’s fought three times in the octagon against sub-par competition. The last opponent Douglas Silva de Andrade is good, but his record is extremely padded by starching twenty foes on the regional scene. He was a worthy opponent and tough test for Yan, but in my opinion no where near the level of Dodson.

The former Flyweight title challenger Dodson is defensively sound, has blazing speed and has power in his hands. In what should be a competitive fight, I believe Dodson’s veteran experience will aide him to win this fight via a close decision.

205 lbs.: Magomed Ankalaev vs. Klidson Abreu – Ankalaev is a special talent, who if not for a brain fart with one second left, would be still undefeated. Any who’s, Ankalaev should be able to dictate wherever this fight goes and I believe in the end, he will get the TKO finish.

170 lbs.: Carlo Pedersoli Jr. vs. Dwight Grant – Honestly, this is a coin flip. Pedersoli is a volume striker, who is also extremely hittable. Grant is a power puncher, who shit the bed in his debut against Zac Ottow. Considering it was a short notice fight and he did finally turn it up in the third round, I’m going with Grant in this one. I’ll say he’ll win via knockout.

145 lbs.: Daniel Teymur vs. Chris Fishgold – Unlike his brother David, Daniel Teymur has been a bust in the UFC. He’s a good striker with poor cardio. If he had power, you could get away with bad cardio early on. However, Teymur doesn’t have power and he’s facing a guy in Fishgold who’s fought five round fights before. Expect the pace and cardio of Fishgold to reign supreme, as he takes this fight via decision.

125 lbs.: Veronica Macedo vs. Gillian Robertson – Tough fight to call. Roberson is an excellent grappler with a real prowess for submissions. Meanwhile, Macedo is a striker who’s shown impressive athleticism and a solid kicking game. As for a prediction, I’ve got Macedo. While she’s 0-2 in the octagon, she fought two tough customers in Andrea Lee and Ashlee Evans-Smith. Her takedown defense is shaky which gives me concern, but I believe level of competition had a role in that. So with that, I have Macedo winning this fight via late TKO.

155 lbs.: Damir Hadzovic vs. Marco Polo Reyes – Hadzovic is a more defensive fighter, who’s too hesitant on the feet. Polo Reyes on the other hand is the complete opposite. He’s aggressive, wild at times and has legit knockout power in his hands. If Hadzovic threw more volume instead of throwing single power shots, he’d have a legit case to win this fight. I expect Polo Reyes to blitzkrieg Hadzovic early, land a flurry of power shots and win this fight via knockout.

170 lbs.: Michel Prazeres vs. Ismail Naurdiev – Even though Naurdiev is coming into this bout on fire, this is a brutal debut opponent. I mean, Prazeres hasn’t tasted defeat since 2015. He’s on an eight fight win streak and has won ten of his last eleven fights. Expect a heavy dose of wrestling and top control from “Tractor”. In the end, Prazeres gets his hand raised for the ninth consecutive time via a submission victory.

155 lbs.: Rustam Khabilov vs. Carlos Diego Ferreira – Quietly Khabilov has been on a tear, winning six consecutive fights. However, the level of competition hasn’t been on par exactly with that streak. Meanwhile, Ferreira is on a three fight win streak and the last two coming via knockout. As for a prediction, I’ve got Ferreira. Khabilov has slowly become one dimensional and I believe Ferreira has the takedown defense and grappling abilities to keep this fight standing. On the feet, Khabilov is comparable, but not comfortable. Ferreira on the other hand, is proving to have some striking chops with som real knockout power. I believe Khabilov will come out strong early with his wrestling, but fade quick due to Ferreira’s resistance. A tired Khabilov then will get clocked and finished via submission.

155 lbs.: Damir Ismagulov vs. Joel Alvarez – Don’t know much about Alvarez, but Ismagulov looked to be a really strong wrestler. I expect him to rinse and repeat with takedowns en route to a decision victory.