For the sixth consecutive week, the UFC is back in action. Headlining the event is former UFC Heavyweight Champion Junior Dos Santos and former title challenger Derrick Lewis. Dos Santos […] 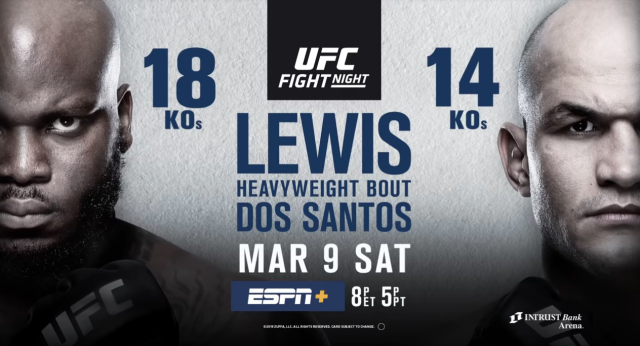 For the sixth consecutive week, the UFC is back in action. Headlining the event is former UFC Heavyweight Champion Junior Dos Santos and former title challenger Derrick Lewis. Dos Santos enters this contest on a two-fight win streak. He decisioned Blagoy Ivanov and finished the previously undefeated Tai Tuivasa via TKO. As for Lewis, this will be his first fight since falling defeat in a Heavyweight title fight against Daniel Cormier. Prior to that loss, Lewis has reeled off three victories that included Martin Tybura, Francis Ngannou and Alexander Volkov. The winner of this bout will undoubtedly be within a fight of a title fight.

265 lbs.: Derrick Lewis vs. Junior dos Santos – Lewis is a hell of a fighter, who has fight ending power that carries into every round. The problem with Lewis is not only his back issue, but his cardio. Against a fighter who can keep distance and recognize when he bursts, is where Lewis falls victim to his foes. JDS is exactly that distance fighter, who with experience has resorted to stay on the outside and pick apart foes. He no longer looks for that one punch knockout, knowing it will eventually come, but in the meantime to stay away from danger.

The longer this fight goes, the slower and more hittable Lewis becomes. And come the championship rounds, I feel like JDS will put away a tired Lewis via TKO ala Mark Hunt.

170 lbs.: Elizeu Zaleski dos Santos vs. Curtis Millender – This is a great co-main event between two strikers who I can’t wait for the world to recognize. dos Santos is a dynamic striker, who lands in volume and puts on a pace that absolutely breaks foe. He’s shown excellent durability too and is currently entering this fight on a six fight winning streak. Millender is more of a technical striker, who is precise in his strikes, all of which have fight ending intention. Millender too has a chin and is entering this fight on a nine-fight winning streak.

As for a prediction, I’ve got Millender. This isn’t an easy fight by any stretch and is going to be close either way. However, I prefer Millender’s powerful precision striking to a high volume striker in this particular fight. The reasoning, is that dos Santos is going to be in the pocket more often then not due to his style. It opens him up to be hit and one of Millender’s strikes could end it. Given dos Santos durability is solid, I don’t think he gets finished. Instead, I think Millender wins this via decision.

170 lbs.: Tim Means vs. Niko Price – This is a favorite for “Fight of the Night”. Two strikers, one in Price who is aggressive and wild and the other in Means, who is a high volume striker with crafty standing elbows. In what should be a slugfest for as long as it last, it’s Means who I believe comes out on top. Means has only once in 39 professional fights succumbed via TKO, and that was due to an injury. His durability to eat punches will serve him well in this fight, as Price is going to land. Where Means is going to capitalize, is Price’s non-existent striking defense. The strikes are going to accumulate fast and Means is going to close the show with a standing elbow. So with that, I have Means winning via knockout.

265 lbs.: Blagoy Ivanov vs. Ben Rothwell – Interesting fight and I’m curious to see what two years from the octagon has done for Rothwell. Anyways, Ivanov is a good heavyweight, but I feel like his career has consisted of tearing through under-skilled Heavyweights. Rothwell on the hand has been fighting the best for a long time and in this particular fight, Ivanov is probably the worst fighter Rothwell has fought since Chris Guilen back in 2008. Rothwell is the bigger man in this fight, far more busier and still has that sneaky gogo choke that tapped out Matt Mitrione and shockingly Josh Barnett in seconds. I think Rothwell once again lands the gogo choke, making a triumphant return.

155 lbs.: Beneil Dariush vs. Drew Dober – Fun fight! Dariush is a good boxer and excellent grappler, whom has been haunted by an iffy chin. Dober is a high volume striker, who lacks power. He’s got good cardio and durability to boot. In what should be a close fight, I edge Dariush. On the feet, it’s going to be close, but Dariush’s wrestling and grappling is where he’s going to win this fight. I see a few Dariush takedown’s being the difference, as he gets the decision nod.

185 lbs.: Tim Boetsch vs. Omari Akhmedov – I’ve got Boetsch in this one. Akhmedov has a nice kicking game and I guess a decent right hand, but the Russian still fades late in fights. Boetsch is the king of comebacks and his cardio is going to propel him in this fight. That, and his power in his hands. So with that, I have Boetsch winning via third-round knockout.

170 lbs.: Anthony Rocco Martin vs. Sergio Moraes – I’m up in he air with this one. Martin is on a tear, winning three consecutive fights and six of his last seven contests. He’s shut down strikers and wrestlers, notably finishing Ryan LaFlare and Jake Matthews. However, Moraes is so crafty and overlooked in the Welterweight division. The “Panther” is 8-1-1 in his last ten fights, with the lone defeat to current Welterweight Champion Kamaru Usman. Moraes has notably beaten Ben Saunders, Tim Means and Neil Magny. In a close fight, I believe Moraes will edge out Martin with his grappling for a change.

135 lbs.: Yana Kunitskaya vs. Marion Reneau – I want to pick Reneau, as she’s the better athlete, grappler and striker. However, Reneau falls into lulls and seems to only step on the gas when the fight is brought to her. In what I presume to be a grinding fight, it’s the bigger Kunitskaya who I think edges out the 41 year old Reneau by decision.

145 lbs.: Grant Dawson vs. Julian Erosa – No clue who Dawson is, but Erosa desperately needs a win to keep his second chance in the UFC afloat. So with that, I’m going with Erosa via knockout!

265 lbs.: Jeff Hughes vs. Maurice Green – This a rematch that I feel like plays out the same way. Hughes exploits Green iffy takedown defense en route to a decision victory.

125 lbs.: Matt Schnell vs. Louis Smolka – The odds seem off to me on this one, as Smolka is the favorite. I believe Schnell has the wrestling and grappling to neutralize Smolka and keep on the feet. And when standing, Smolka is extremely hittable. Schnell has some pop, but not enough to finish the durable Smolka. So with that, I have Schnell via decision.

170 lbs.: Alex Morono vs. Zak Ottow – Honestly, the way Morono looked against Kenan Song, I honestly can’t envision him losing against Ottow. I mean, Ottow is tough, but his lack of activity and athleticism is going to cost him in this fight. Morono is a volume striker and I believe he will have his way on the feet en route to a decision victory.

155 lbs.: Dan Moret vs. Alex White – No clue who Moret is, but White has been around for awhile and is desperately in need of a win. So with that, I have White winning via decision.