For the fifth consecutive week, the UFC is back in action. The promotion heads south of the equator, as they touch down in Rio de Janeiro, Brazil. Headlining the event […] 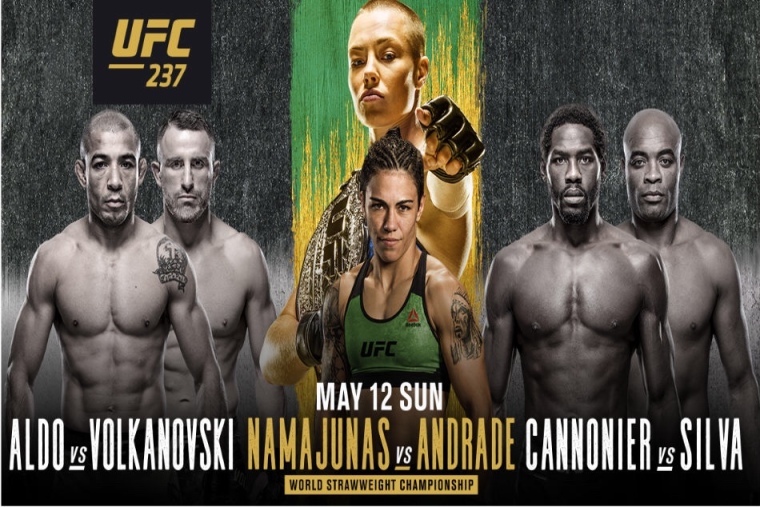 For the fifth consecutive week, the UFC is back in action. The promotion heads south of the equator, as they touch down in Rio de Janeiro, Brazil. Headlining the event is a Women’s Strawweight Title fight between Champion Rose Najamunas and challenger Jessica Andrade. This will be Namajunas first fight in over a year, as well as her second title defense. Thug Rose is on a three fight win streak, beating Michelle Waterson and Joanna Jedrzjejczyk twice. As for Andrade, despite being the challenger, she will be fighting on home soil. Andrade has won three fights in a row, with the last being a one-punch knockout over Karolina Kowalkiewicz. This is bound to be an excellent fight and a very ballsy one for Thug Rose to take the fight in her opponents backyard.

115 lbs.: UFC Strawweight Champion Rose Namajunas vs. Jessica Andrade – Man this is a tough fight to call. On one end, Rose Namajunas is an excellent fighter at range and has show glimpses of legit pop in her hands. She also has a dangerous ground game, one in which she really hasn’t used much of recently though. On the other end, you have a bull in Jessica Andrade. Loaded with endless cardio, Andrade steams forward with pressure and aggression. She is one of the few women in the division who has legit one punch knockout power. I mean, the way she put away Karolina Kowalkiewicz was downright scary. Andrade also can wrestle and control her foes on the mat, as she physically is a brute to deal with.

As for a prediction, I lean Andrade. I just believe physically she can rag-doll Namajunas in the clinch. On the feet, Andrade’s pressure and aggression is going to give Namajunas fits, as she cant set up her rangy offense. In the end, Andrade’s cardio, pace and volume striking is going to eventually engulf Namajunas en route to a TKO victory.

185 lbs.: Anderson Silva vs. Jared Cannonier – While I’m very high on Jared Cannonier at Middleweight, I suspect a competitive fight that favors Anderson Silva in his home country of Brazil. I also suspect that given Silva is noncommittal about retirement, the UFC is going to do everything in their power to get him back into a title fight. A win over Cannonier grants Silva a title eliminator against Jack Hermansson, book it. As for this fight, Silva has an iron chin and is going to endure Cannonier’s early onslaught. As Cannonier’s power and speed wane, I expect Silva to counter punch and land just enough to edge out the later rounds en route to a decision victory.

145 lbs.: Jose Aldo vs. Alex Volkanovski – This a great fight and I love how everyone wrote Jose Aldo off, but seemingly is back on the bandwagon after two consecutive finishes over top opponents. I however, realized that Max Holloway is just a monster for anyone at Featherweight and Aldo wasn’t washed up. As for Alex Volkanovski, what a rise. From a Rugby player to a legit UFC Featherweight contender. The Aussie is a perfect 6-0 in the octagon, with three finishes and the most recent one coming against Chad Mendes.

As for a prediction, I’ve got Aldo. The former Featherweight kingpin is a handful. He’s got impeccable takedown defense and a dangerous kickboxing game that features speed, good movement, heavy leg kicks and power hooks. Volkanovski is extremely durable, has excellent cardio and his jab/body kicks have gotten the job done thus far. The problem I see though is Volkanovski isn’t going to take Aldo down nor bully him against the cage. And in a kickboxing fight, Aldo is going to keep Volkanovski at a range where he’s going to crack him. In the end, I see Aldo taking this via TKO.

170 lbs.: Thiago Alves vs. Laureano Staropoli – Given Laureano Staropoli is a brawler and Alves is an aging vet who’s durability is questionable, I feel like this might be a rough one for Alves. However, Alves is coming off a controversial victory over Max Griffin and is likely to get home cooking in Brazil should this be competitive. Except, I don’t think it will. I believe Staropoli will batter Alves for three rounds, ultimately finishing the veteran towards the waning minutes of the fight via TKO.

135 lbs.: Irene Aldana vs. Bethe Correia – I’m sorry, but Bethe Correia isn’t very good and she hasn’t fought in nearly two years. Aldana on the other hand has a bright future and she’s tall and lanky for the division. In this contest, I see Aldana’s reach picking apart Correia, eventually finishing the Brazilian later in the fight via TKO.

155 lbs.: Kurt Holobaugh vs. Thiago Moises – Kurt Holobaugh has a had tough second stint in the UFC, facing two talented foes in Shane Burgos and Raoni Barcelos. Despite being finished in both fights, he looked good up until the finish. Now at Lightweight, he should be healthy and ready to rock. No offense to Thiago Moises, but Holobaugh is in desperate need of a win and I’m backing him to take this fight via decision.

170 lbs.: Warlley Alves vs. Sergio Moraes – I used to be high on Warlley Alves, thinking he could be a Welterweight contender. He backed that notion up too, winning his first four UFC fights. Even taking out top foes like Colby Covington, Alan Jouban and Nordine Taleb. However, cardio issues have plagued him. Also he just looks slower. Now, Sergio Moraes isn’t exactly a world beater, but he serviceable. He throws looping power strikes on the feet and has a very dangerous ground game. In a rather close fight, I’ll take Moraes winning via decision.

a striker, but he pressures and throws looping punches that get his foes attention.

155 lbs.: Clay Guida vs. B.J. Penn – It’s been over eight years since B.J. Penn last tasted victory. He’s lost six fights in a row and the only competitive fight he’s had, was against a veteran in Denis Siver. Now, Clay Guida is exactly the opponent he should be fighting if he’s going to continue to do such. Problem is, it’s too late. With that said, Guida takes down Penn at will en route to a decision victory.