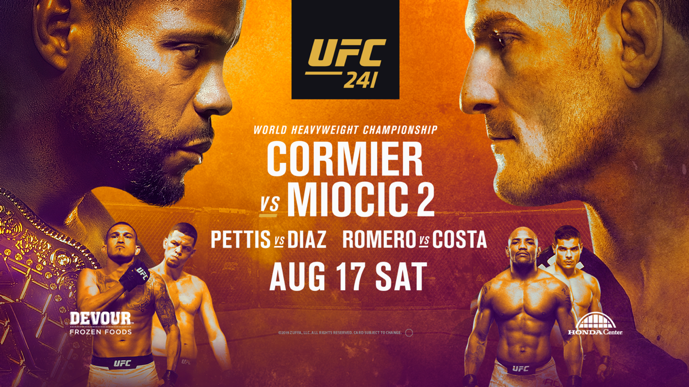 For the ninth consecutive week, the UFC is back in action with absolute banger of a card in Anaheim, California. The headliner is a Heavyweight Title rematch between Champion Daniel Cormier and the former Champion Stipe Miocic. The first fight happened back in July, and more than a year later the former longest reigning Heavyweight Champion finally gets his crack to his belt back. Only Brock Lesnar’s potential return loomed over Miocic’s chance at a rematch, which is kind of crazy. Nevertheless it’s going down and also on the card, after three years away, Nate Diaz is returning against the dynamic and always exciting Anthony Pettis. O, and did I mention Yoel Romero is taking on Paulo Costa?

265 lbs.: UFC Heavyweight Champion Daniel Cormier vs. Stipe Miocic – While I don’t think this fight goes exactly the way the first fight went, I still believe Cormier wins it. While Miocic is the much bigger man, has amazing wrestling and has legit pop in his hands, he’s yet to face an opponent like Cormier that has the cardio to keep the same pace each round. Everyone Miocic has faced with the exception perhaps Werdum has either lacked takedown defense, cardio or a chin. Cormier has all three and I expect him to outwork Miocic for every round this goes. My prediction though, is by round three, Cormier gets Miocic to the ground potentially via a punch and submits him. And Still.

170 lbs.: Nate Diaz vs. Anthony Pettis – I’m so excited for this fight and I can’t believe Nate Diaz has been out for nearly three years. I feel like we’ve missed out on so many fun fights. Anyways, he’s back and against the always entertaining Anthony Pettis. As for the fight, I’ve got Diaz. Despite the long layoff and the fact that Pettis just knocked out Stephen Thompson, in this fight I feel Diaz is better everywhere. On the feet, Diaz is more durable, works the body like no other and absolutely racks up the strikes. Pettis is more dynamic, yet his striking defense leaves him often vulnerable. On the ground, Pettis no slouch, but he’s no Diaz.

Anyways, the point I’m getting to is that Diaz is going to outwork Pettis with his volume striking. In the third round, a tired and battered Pettis succumbs to the pace Diaz puts on him. So with that, I have Diaz winning via TKO.

185 lbs.: Paulo Costa vs. Yoel Romero – This is going to be fun as long as it last. Costa is an agressive pressure power striker, who is presumably going to be headhunting for a knockout. Romero is a calculated power puncher who has some of the very best wrestling in mixed martial arts. However, he rarely uses his wrestling and elects to instead strike.

As for a prediction, I’ve got Romero. This is a big jump up for Costa and not really a good matchup for him. His agression and unknown takedown defense against a caliber wrestler like Romero is going to put him in trouble. In my opinion, Romero cleans the floor with Costa in one round via knockout.

145 lbs.: Gabriel Benitez vs. Sodiq Yusuff – Interesting fight, but I got Yusuff. I think Benitez is is a tough out for anyone, as he’s pretty well rounded, but he’s not strong in any aspect. Yusuff though, is an excellent striker who’s not afraid to throw it. I believe his ability to rack up strikes should win this fight via decision.

185 lbs.: Derek Brunson vs. Ian Heinisch – Part of me believes that Brunson can win this. He’s a power puncher with excellent wrestling. Then part of me remembers his recent fights and how hesitant he is to strike, which is contrary to his style early on in his career.

Heinisch is the definition of grit and a workhorse. He’s going to be in Brunson’s face and making him work for every position. In the end, given Brunson’s lack of engagement of late, Heinisch is going to win on his willingness to engage via decision.

155 lbs.: Devonte Smith vs. Khama Worthy – I’m really surprised they found an opponent for Smith, but thank god. The man’s a stud and a bona-fide knockout artist. Given this is the ESPN headliner, expect Smith to gain stardom after this knockout victory.

135 lbs.: Raphael Assuncao vs. Cory Sandhagen – I’m back-and-forth with this one. On one end, Sandhagen is on the rise. He’s got excellent striking, an iron chin, a relentless pace and pressure and cardio for days. He’s going to challenge for a belt one day, no doubt in my mind.

On the other end, Assuncao while aging is durable, a calculated counter striker and has some good wrestling chops. The reason I’m leaning with him is the aggression of Sandhagen goes right into his counter punching. I also see opening for takedowns, which in what I presume to be a close fight mean a lot. So with that, I have Assuncao edging out a split decision victory.

155 lbs.: Christos Giagos vs. Drakkar Klose – If Giagos had his cardio issues under control, he’d have a real shot here. However, Klose is calculated striker who is going to use his pace and cardio to break Giagos. I think a late finish is possible, but I’m going to go with Klose via decision.

140 lbs.: Manny Bermudez vs. Casey Kenney – I’m really impressed that Kenney debuted against Ray Borg and beat him. However, Borg had a lot of issues that kept him from fighting for a long time. Not to dismiss Kenney’s win, but Borg was comprised heading in mentally. Anyways, I believe Bermudez is a future contender. While his striking needs work, his knack for taking guys down and submitting them absolutely doesn’t. So with that, I have Bermudez winning via submission.

115 lbs.: Hannah Cifers vs. Jodie Esquibel – While Cifers isn’t a world beater yet, she is tough as nails and absolutely relentless. I feel like she coast through this fight with her volume striking. So with that, I have Cifers winning via decision.

135 lbs.: Brandon Davis vs. Kang Kyung-ho – This is a fun fight, worthy of being higher up on the card. Davis is a willing brawler, who lives to go punch for punch with his opponent. Gifted with an iron chin and some good striking chops, Davis is a tough out for any foe who’s willing to keep the fight on the feet. Kyung-ho is an all around talent, who’s massive for the weight class. With solid wrestling and grappling, which is aided by his natural strength, Kyung-ho has found relative ease in taking down foes. While on the ground, Kyung-ho has suffocating top control, as well as prowess for submissions.

In a fun fight, I lean with Kyung-ho to lean on his wrestling and take advantage of the iffy takedown defense of Davis. So with that, I have Kyung-ho winning via decision.

125 lbs.: Shana Dobson vs. Sabina Mazo – Honestly, this fight is a coin flip… Mazo via decision.