The UFC is back in action, as the APEX in Las Vegas, Nevada plays host to yet another Fight Night Card. Headlining the card is a pair of Heavyweight Contenders, […]


The UFC is back in action, as the APEX in Las Vegas, Nevada plays host to yet another Fight Night Card. Headlining the card is a pair of Heavyweight Contenders, as the surging Ciryl Gane takes on Alexander Volkov. In what should be an excellent fight, one wonders what a win for either of them means next? The Heavyweight division in a weird spot, as Champion Francis Ngannou is set to take on Derrick Lewis. After that, Jon Jones is awaiting his title shot. You have Stipe Miocic and Curtis Blaydes up there too. It’s less than ideal to be apart of the division, but you keep winning enough, you’re bound to fight for a title. Right? 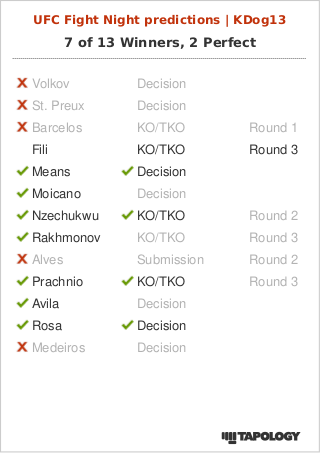 Note: I’m sticking with every pick, but one – I’m going with Ike Villanueva to win via first round knockout.

265 lbs.: Ciryl Gane vs. Alexander Volkov – Everyone is seemingly on Ciryl Gane and I understand. The man has excellent striking technique and he’s no slouch on the ground. The problem I foresee here is that, maybe not him, but people underestimate Alexander Volkov. He was a former Bellator and M-1 Heavyweight Champion. He’s 7-2 in the UFC, with finishes over Alistair Overeem and Fabricio Werdum. Volkov was also less than 20 seconds away from thoroughly beating Derrick Lewis. If his other loss to Curtis Blaydes had no time limit or at least an additional round, he would of put away Curtis Blaydes. Volkov is underrated and in my opinion, is a legit contender for the Heavyweight strap.

The problem for Gane in this fight, is that it’s five rounds. If it were three, he could follow the gameplan of Blaydes and go with a heavy takedown approach. Given that it’s five rounds, I can’t see Gane having the cardio or energy to keep taking Volkov down. The Russian is known to continue to pop up when taken down and with perhaps the best cardio in the Heavyweight division, he can outlast anyone. Now, Gane is an excellent striker too. So he could very well just go toe to toe. I just feel that the length and volume of Volkov is a nightmare for anyone over five rounds. So with that give me the upset, as I have Volkov winning via knockout.

265 lbs.: Tanner Boser vs. Ovince Saint Preux – This fight is one of those where you stay away. Both my head and heart are confused, and I have no real lean on anyone fighter. I guess since I have to make a prediction, give me the veteran OSP. He’s at least got the head kick knockout or Von Flue in his back pocket. Tanner Boser on the other hand offers up volume and cardio. So with that, give me OSP to win via decision.

135 lbs.: Raoni Barcelos vs. Timur Valiev – I have Raoni Barcelos all day here. I’m super high on the Brazilian, as he is a well rounded mixed martial artist and quite frankly, I believe he deserves ranked opponents. Not that Timur Valiev is bad, I mean his record speaks for itself at 17-2. The problem in this fight for him is that I only see one route to him winning. That would be taking down Barcelos, which isn’t an easy task. Boasting an 85% takedown defense, Barcelos has excelled at keeping the fight on the feet. From there, his volume, power and pressure just overwhelm opponent’s. The same will occur here, as Barcelos wins via TKO.

145 lbs.: Andre Fili vs. Daniel Pineda – Unless Andre Fili has a mental lapse, he should win this fight. Daniel Pineda is a sprinter, coming out guns blazing in the first round and ultimately slowing down after that. As long as Fili avoids getting caught, he should be able to weather any early storm and put it on Pineda. So with that, give me Fili to get a TKO finish here.

170 lbs.: Nicolas Dalby vs. Tim Means – If Tim Means can shrug off the constant takedown attempts of Nicholas Dalby, I feel comfortable in saying that his volume will reign supreme in this fight. In what might be a close fight, give me the ‘Dirty Bird’ to win via decision – using his volume, cardio and pace to outlast Dalby.

155 lbs.: Jai Herbert vs. Renato Moicano – This is a tough draw for Jai Herbert, but at the same time, a golden opportunity to catapult himself into the division’s top fifteen fighters. Do I believe he wins? No, but he definitely has a puncher’s chance against the iffy chin of Renato Moicano. The problem though I foresee for Herbert is that Moicano is just too skilled everywhere for the Brit to find success anywhere. In the end, I have Moicano winning via decision.

170 lbs.: Michel Prazeres vs. Shavkat Rakhmonov – Before losing to Ismail Naurdiev, Michel Prazeres had won eight consecutive fights, including beating Gilbert Burns. The Brazilian excels at taking his opponents down, and smothering them for the entirety of the round. That technique has formulated into a 10-3 record inside the octagon. However, most of those wins are at Lightweight. The move up to Welterweight has kind of zapped his overpowering strength advantage over opponents. Throw in a two year absence and a return fight against a stud in Shavkat Rakhmonov – and I don’t see things going well for Prazeres. So with that, give me Shavkat Rakhmonov to win via TKO.

170 lbs.: Warlley Alves vs. Jeremiah Wells – Given the short notice of the fight, I have Warlley Alves winning. Jeremiah Wells is built like a tank, and I’m concerned his cardio wanes after round one. The recipe to defeat Alves has always been to outlast him and take over as his cardio dissipates. However, if this goes past one, and both men are gassed – give me Alves skillset over Wells. So with that, I have Alves winning via submission.

135 lbs.: Julia Avila vs. Julija Stoliarenko – I believe Julia Avila got everyone’s attention to start her UFC career, that everyone neglected to see that she wasn’t ready to face a complete tank like Sijara Eubanks. Regardless, this is a nice bounce back fight for the promising Bantamweight. As long as she avoids Julija Stoliarenko’s arm bar attempts from guard, Avila should cruise to a decision victory.

145 lbs.: Justin Jaynes vs. Charles Rosa – Justin Jaynes back is against the wall and I saw he bet on himself. Now, I don’t think this fight is necessarily as daunting as his recent ones. However, I just can’t back the man. His takedown defense nor gas tank has been all that well. If Charles Rosa does anything well, it’s find a way to get his opponents down and smother them via top control. He’s a submission threat as well, but I’m going to bank on the toughness of Jaynes to see three rounds. So with that, I have Rosa winning via decision.

155 lbs.: Damir Hadzovic vs. Yancy Medeiros – This is a toss-up, but I lean on Yancy Medeiros due to his durability, cardio and constant will to win. There’s definitely a chance he gets bettered by the more technical striker Damir Hadzovic, but give me Medeiros to in via decision.