The UFC is back in action for the second consecutive week with a hard hitting headliner. Former UFC Heavyweight Champion Junior dos Santos looks to continue his climb back to […] 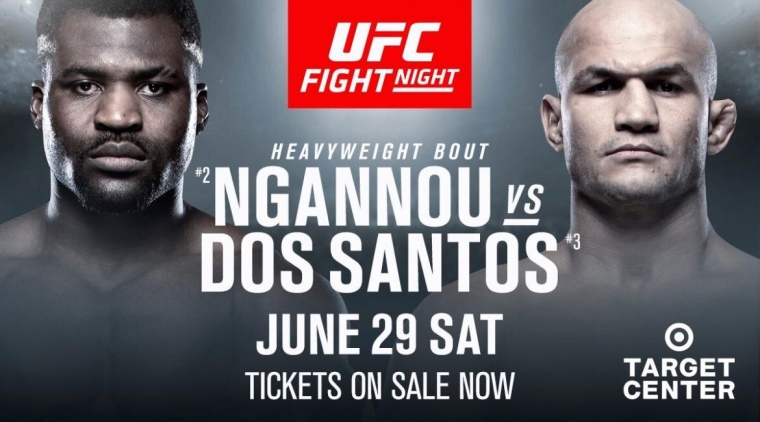 The UFC is back in action for the second consecutive week with a hard hitting headliner. Former UFC Heavyweight Champion Junior dos Santos looks to continue his climb back to the top, as he puts his three fight win streak on the line against former title challenger Francis Ngannou. The hard hitting Cameroonian has won three in a row including dispatching former UFC Heavyweight Champion Cain Velasquez in a mere 26 seconds.

Undoubtedly the winner of the headliner is in line for a title shot. Given both men are heavy handed, I’d say not to blink as this one might be over within a minute.

265 lbs.: Francis Ngannou vs. Junior dos Santos – This is a hell of a main event and I have an inkling this fight won’t go past two minutes. Why? Well because Ngannou is the hardest hitter on the planet. I mean, Alistair Overeem’s head is still in orbit as we speak. Jokes aside, I’m not quite sure that the former UFC Heavyweight Champion dos Santos has the chin to withstand Ngannou’s power. The wars with Cain Velasquez and even Stipe Miocic have clearly nicked off what was once an iron chin. Now, it’s susceptible to what’s coming in this fight. A knockout. So with that, I have Ngannou winning via knockout.

125 lbs.: Joseph Benavidez vs. Jussier Formiga – Tough fight to call. Benavidez has long been a perennial top three Flyweight and has been on a bit of a career resurgence of late. However, Formiga has won four in a row. The last two were super impressive over Sergio Pettis and Deivenson Figueiredo. The Brazilian has never gotten over the hump in title eliminators, but I truly think it’s finally his time. So with that, I have Formiga winning via decision.

170 lbs.: Demian Maia vs. Anthony Rocco Martin – This is a toss up. Martin is on a tear, and has a well rounded game that can stifle Maia. However, the 41 year old veteran is master at grabbing a hold of his foes, working into an advantageous position and either winning controlling the opponent or winning via submission. As for a prediction, I actually think the old man gets it done. Let’s say, Maia via submission.

155 lbs.: Roosevelt Roberts vs. Vic Pichel – I’m high on Roberts, but not sold yet. Pichel is tough step up in my opinion. He’s got solid power and an improving takedown defense. I could very well see him edge this one out. So with that, I’m calling upset. Pichel wins via decision.

155 lbs.: Drew Dober vs. Marco Polo Reyes – If Dober chooses to brawl, Reyes has a chance to knock him out. However, Dober has a chin. Dober also has the wrestling to neutralize anything Reyes has to offer. Throw in Dober’s high volume striking and I see him easily taking this fight via decision.

205 lbs.: Paul Craig vs. Alonzo Menifield – Maybe Craig can pull off a miraculous submission, but I’m not banking off that one trick. Menifield looks like a promising young talent with heavy hands. Given Craig’s willingness to strike, I’m expecting Menifield to capitalize and knock him out.

135 lbs.: Journey Newson vs. Ricardo Ramos – Don’t know anything about Newson, but Ramos is a tough debut. He’s well rounded, has already notched three UFC wins and has more experience against better talent. So with that, I have Ramos winning via submission.

205 lbs.: Eryk Anders vs. Vinicius Moreira – This is a do or die fight for Anders. Luckily Moreira has been a gluten for punishment and a willing striker, despite being a stationary target. With that said, I have Anders winning via knockout.

155 lbs.: Jared Gordon vs. Dan Moret – Despite dropping two straight fights via knockout, I still have high hopes for Gordon. He’s tough as nails, throws tons of volume, puts on a tiring pace and has cardio for days. Moret is fodder for Gordon to get back on track. So with that, I have Gordon winning via late TKO.

205 lbs.: Dalcha Lungiambula vs. Dequan Townsend – Um, Lungiambula is fun to say, but I’m going with short notice Townsend. Even though he’s fighting a weight class above, he’s still 6 inches taller than his foe. He’s also fought better talent outside the UFC and is a pure finisher. So with that, I have Townsend winning via TKO.

115 lbs.: Emily Whitmire vs. Amanda Ribas – Don’t know Ribas, but Whitmire impressed me in her last fight when she absolutely tore through Alexandra Albu. I’m non expecting that again, but Whitmire to win via decision.

265 lbs.: Maurice Greene vs. Junior Albini – After debuting with a quick knockout over a durable Timothy Johnson, Albini has proved to be nothing more than a flash in a pan. Given his cardio woes, I’ll go with Greene here via late submission victory.