For the third consecutive week, the UFC is back in action. This time, with a stacked card from top to bottom. Headlining the event is no other than the GOAT, […] 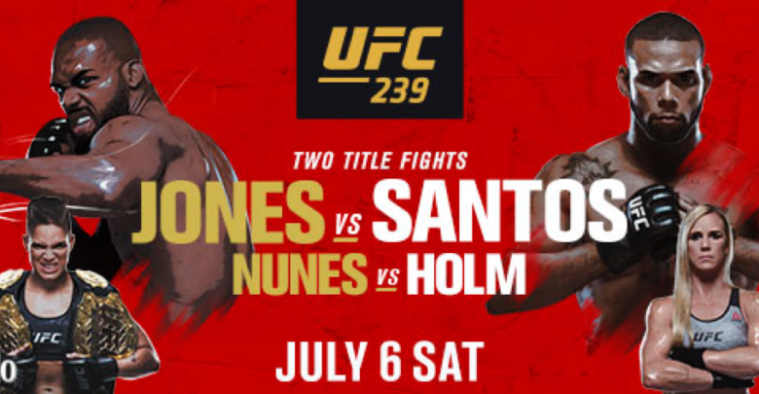 For the third consecutive week, the UFC is back in action. This time, with a stacked card from top to bottom. Headlining the event is no other than the GOAT, Jon Jones. He takes on challenger and former Middleweight Thiago Santos, who enters this fight on the heels of a four-fight win streak. Jones certainly is a big favorite, but Santos has the power to make things interesting. Also on the card is the female GOAT and current double champ Amanda Nunes, as she looks to solidify her legacy against former UFC Bantamweight Champion Holly Holm.

205 lbs.: UFC Light Heavyweight Champion Jon Jones vs. Thiago Santos – Honestly, this is no disrespect to Santos, but there’s no way I’m picking against the greatest fighter of all-time in Jon Jones against the likes of him. I mean, Santos has power and has certainly earned this title shot, but this fight is above his pay grade. Jones is a technician and is as elusive as they come in avoiding power shots. He’s going to control this fight wherever it goes. If Santos puts him in any dangerous spot, t will hit the mat and end via ground-and-pound. In fact, that my prediction. Jones wins via TKO.

135 lbs.: UFC Bantamweight Champion Amanda Nunes vs. Holly Holm – Its kind of crazy to me that the greatest female fighter of all-time was a mere blip on the radar when she fought Ronda Rousey. Even nowadays, Amanda Nunes deserve more praise then she gets. Nunes has won eight fights in a row, knocking off Valentina Shevchenko twice, Ronda Rousey, Miesha Tate and Cris Cyborg in that span. The craziest part of the streak is perhaps going up to Featherweight to dethrone Cyborg, who hadn’t suffered defeat since her debut in 2005.

As for Holm, the former Bantamweight Champion could be fighting for her last world title. She’s lost in her last three title fights, so there definitely seems like an added pressure to do everything possible to win this. She’s got the skillset necessary and she’s already taken Cyborg’s power shots, so there’s definitely a chance.

A chance in which I’m going with. As good as Nunes is, and her power is an enormous game changer, she has had issues with cardio. Not of late, but if Holm turns up the pace, I could see a scenario in which she has issues late in the fight. I could also see Nunes going balls to the wall early and Holm surviving the initial storm. Then going to work en route to a decision victory.

170 lbs.: Ben Askren vs. Jorge Masvidal – Out of all the fights on the card, this has to be the most anticipated fight on the card. Credit that to Ben Askren, who’s cult following has risen him to a stardom in the UFC in which they neglected for so long. And with a UFC victory already to his name, Askren is perhaps one victory away from fighting for the belt. A title fight that would certainly intrigue the masses.

However, in order for that to even happen, Askren will need to get through one of the more experienced and well rounded fighters in the business, Jorge Masvidal. The former backyard brawler is coming off an electric knockout victory, as he stormed into enemy territory and floored hometown favorite Darren Till. The victory snapped a two fight losing streak. The only problem Masvidal has had in the UFC, is the judges. Of his six UFC defeats, all by decision, four of them were split.

In what could be grind of a fight, the fact that Masvidal has had issues winning decisions could be a problem. However, in Askren’s debut he was beat up early and looked a tad tired in the opening round. That’s not the norm, as Askren has great cardio. Then again, who exactly was he fighting? So with that, I have Masvidal winning via late TKO.

205 lbs.: Jan Blachowicz vs. Luke Rockhold – This is a fun fight, as you have the former UFC Middleweight Champion Luke Rockhold debuting at Light Heavyweight against a top contender in the division in Jan Blachowicz. Rockhold, enters this contest having not fought in over a year. I doubt rust will be a factor though. The only factor in this fight is Blachowicz’s power against Rockhold’s questionable chin.

Now, it’s entirely plausible that Rockhold’s chin has been compromised due to the ridiculous weight cut he was making to get down to 185 pounds. It’s also entire possible that we could be truly get the best of Rockhold now that he’s healthy. And with that notion in mind, and no disrespect to Blachowicz, I’m foreseeing a successful LHW debut for Rockhold. If he can get top control at any point in this fight, it’s over. So with that, I have Rockhold winning via TKO.

170 lbs.: Michael Chiesa vs. Diego Sanchez – I gotta admit, seeing Diego Sanchez win two fights in a row at this stage of his career is fun, but it’s coming to end. Michael Chiesa is whole different animal than an inexperienced Mickey Gall. I expect Sanchez to get touched up on the feet, taken down and submitted rather quickly.

145 lbs.: Arnold Allen vs. Gilbert Melendez – This is a changing of the guard type fight, and I’m picking the veteran Melendez. Despite the current four fight skid and having not won in over five years, Melendez is still a game fighter. He’s fought only the best throughout his career and nearly captured the UFC Lightweight title back in 2013.

Allen on the other hand has yet to taste defeat in the UFC, sitting at a perfect 5-0. The last two victories though have been concerning, as he lacked the offensive output he showed in his first three UFC contests. Not to say Allen’s gone backwards in his progression, as he’s won both fights, but he’s very beatable right now. Also, Allen’s yet to face anyone of Melendez’s caliber yet.

As for a prediction, I believe Allen will have his moments early, but as his cardio wanes and Melendez turns up the pace and presssure, the Brit will get outworked. So with that, I have Melendez winning via decision.

135 lbs.: Marlon Vera vs. Nohelin Hernandez – Vera is a tough out for anyone, let alone a short notice debuting fighter. So with that, I have Vera winning via TKO.

115 lbs.: Claudia Gadelha vs. Randa Markos – I’ve always thought Claudia Gadelha would be a champion, but it seems like a combination of cardio issues and recent wars have hampered her. There’s a possibility she’s on the decline, but then again she’s only 30 years old. As for Randa Markos, even though she’s wildly inconsistent and hasn’t won back to back fights since 2013, she’s a tough out for anyone. Markos is well rounded and if she can string together a few wins, Intruly believe she’s a dark-horse to win the Strawweight title.

135 lbs.: Alejandro Perez vs. Song Yadong – Alejandro Perez is a good fighter, who’s hard to takedown and won’t overdue anything that puts him at risk. However, his work rate and pace are often snail-like. Against a power puncher like Song Yadong, who is likely to land the more impactful punches, I’m expecting the judges to favor that. So with that, I have Yadong winning via decision.

170 lbs.: Ismail Naurdiev vs. Chance Rencountre – I’m excited for this fight on the sheer fact that Ismail Naurdiev’s UFC debut against Michel Prazeres was shocking and exciting. I mean, Prazeres hadn’t lost in four years and was riding an impressive eight-fight win streak. Naurdiev showed excellent composure, stuffing and reversing several takedown attempts. On the feet, Naurdiev showed off his real arsenal. In this fight, I’m expecting Naurdiev to be in control wherever this fight takes place. So with that, I have Naurdiev winning via TKO.

135 lbs.: Julia Avila vs. Pannie Kianzad – Julia Avila is a nice addition in the Bantamweight division and a savage. Look for her to stand out in a big way with a TKO victory.