With seemingly all of sports shut down due to the coronavirus, the UFC remains as one of the only continuing on. However, there is a caveat. No fans will be […] 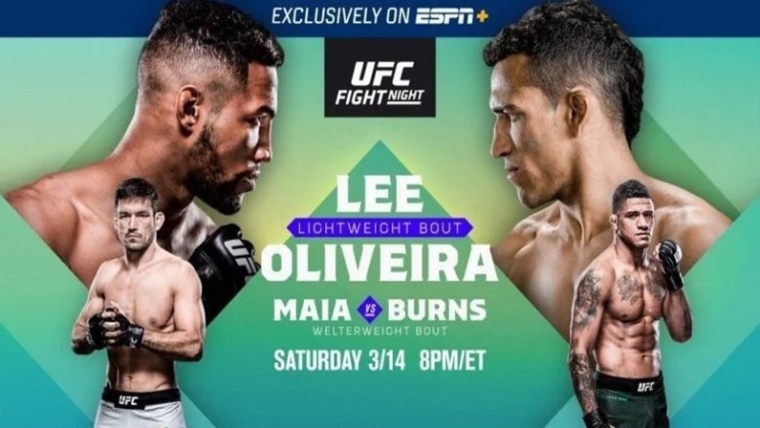 With seemingly all of sports shut down due to the coronavirus, the UFC remains as one of the only continuing on. However, there is a caveat. No fans will be in attendance. A strange thought for any sport, as fans are the reason these athletes compete. They feed off their energy, good or bad. It’s going to be an odd scene as a viewer and for the athletes competing for sure. For us fans, we are lucky to be distracted with this fight card. Headlining the event is two Lightweight contenders in former title challenger Kevin Lee and the red hot all-time UFC submission leader Charles Oliveira. The winner is all but assured a big upcoming fight.

155 lbs.: Kevin Lee vs. Charles Oliveira – This is a hell of a main event and I’m conflicted. Lee rebounded tremendously with a masterful performance and knockout again the previously undefeated Gregor Gillespie. He’s such a talent. I can’t say if it’s fight IQ that has harped him or his competition is just better. I mean, I see Championship qualities.

As for Oliveira, six wins in a row, all via stoppage. A fight against a top ranked foe is long overdue for the UFC all-time submission leader Oliveira. Perhaps, as he enters his 30’s, he has hit his prime.

As for a prediction, I have Lee. He missed weight, which does concern me in a five round fight. But, I still have hopes for the talent to use timely wrestling and his striking to wear down and eventually finish Oliveira via TKO.

170 lbs.: Demian Maia vs. Gilbert Burns – This is an excellent fight and I’m curious to see if Maia can fend off these young guns still. He’s such a strong grappler with arguably the best submission ability in mixed martial arts. However, Burns too is strong and too has excellent grappling and submission ability. What he excels at over Maia by a mile is striking, which is why I’m picking him. So with that, Burns wins via decision.

205 lbs.: Johnny Walker vs. Nikita Krylov – This should be fireworks out of the gate. Two Bonafide finishers, one who’s well rounded in Krylov and the other is a dynamic striker in Walker. Even though Walker’s hype train was halted momentarily in his last fight, you gotta love his crazy fighting style. However, his crazy open style leaves him open to getting cracked or taken down. What the hell am I saying, Walker wins this via KO.

155 lbs.: Francisco Trinaldo vs. John Makdessi – Trinaldo is going to have his way here. He’s a physical brute, good on the feet with legit power and if he’s in top control, good luck getting up. Makdessi has some tricky striking, but his volume isn’t there. I expect Trinaldo to control wherever this fight takes place and win ultimately via decision.

125 lbs.: Jussier Formiga vs. Brandon Moreno – Formiga has never won the big one to grant him a title shot and it’s not happening here. Moreno is a dog. Relentless on the feet, a scrambling machine on the ground and cardio for days. He’s a matchup problem for anyone and especially against a guy who can’t get over the hump. So with that, I have Moreno winning via decision.

115 lbs.: Amanda Ribas vs. Randa Markos – Love Markos. She’s my dark horse of the division, but in 13 UFC bouts, she’s yet to win two in a row. I need to see consistency and Ribas in my opinion, has the ability to be a future contender. Well rounded, physically strong and good cardio. This should be her fight…Ribas via decision.

170 lbs.: Elizeu Zaleski dos Santos vs. Aleksei Kunchenko – dos Santos has too much of an all around game for the strictly striker Kunchenko to handle. dos Santos rolls via decision.

135 lbs.: Enrique Barzola vs. Rani Yahya – I’m conflicted about this fight. Barzola is well rounded, but isn’t a specialist in any one area. Yayha however is a grappling and submission specialist. The striking is starting to become more serviceable to boot. Problem is Yayha’s cardio in the later rounds, but I’m still going to side with him eking out a decision on the heels of the first two rounds.

125 lbs.: Mayra Bueno Silva vs. Maryna Moroz – Love the power of Silva. Think she gives fits to a lot of Flyweights, including Moroz. So with that, I have Silva winning via decision.

125 lbs.: Bruno Silva vs. David Dvorak – I’ve seen some highlights of Dvorak and I’m liking this signing. It kind of reassures that the UFC is still carrying on with the Flyweight division as well. As for a prediction, Dvorak wins this via TKO.

135 lbs.: Veronica Macedo vs. Bea Malecki – No clue about Malecki, but Macedo is underrated talent. If she can shore up her takedown defense, I think we have something special in the young Venezuelan. So with that, I have Macedo winning via decision.