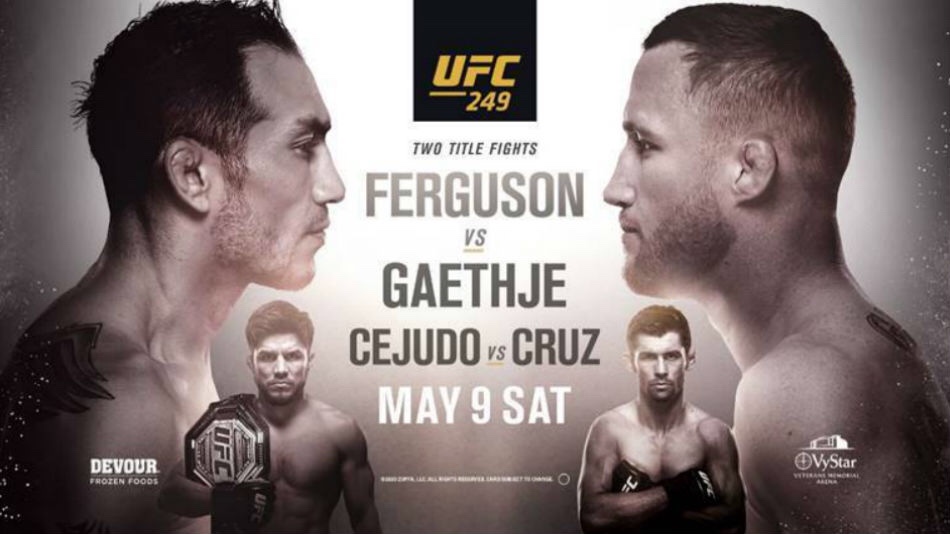 155 lbs.: Tony Ferguson vs. Justin Gaethje for interim UFC Lightweight championship – While I’m gutted Khabib Nurmagomedov isn’t in this fight, I’m not at all upset that Justin Gaethje is stepping in. The man is first-team all violence. In six UFC fights, he’s picked up four Fight of the Night bonuses and two Performance of the Night bonuses. In other words, when Gaethje steps in the octagon, it’s bound to be a hell of a fight.

The same can be said about Tony Ferguson. The uncrowned Champ. A winner of twelve consecutive fights, Ferguson is one of the best fighters to grace the octagon. He’s also part of the first-team all violence. He’s finished five of his last six fights and total of eleven in the UFC. Ferguson has also been a bonus machine, taking home five Fight of the Night bonuses and three Performance of the Night bonuses in his last eight fights.

As for a prediction, I’ve got Ferguson. It’s a tough call, considering how good Gaethje is. I’m banking on the durability and scrambling ability of Ferguson to avoid the storm that is Gaethje. If for whatever reason he gets cracked and dropped, Ferguson’s guard game is downright scary. Just ask Kevin Lee. Ferguson tore up his face with elbows tally submitted him with a triangle choke. However, if this stays on the feet. It’s the unpredictability of Ferguson against the aggression and output of Gaethje. Anything can happen. However, I see Ferguson dragging this fight into deep waters, where he drops and submits a tired Gaethje.

135 lbs.: Bantamweight champion Henry Cejudo vs. Dominick Cruz – This is a really fun fight and it’s refreshing to see Cruz back in the octagon. Now, this isn’t the best stylistic fight for guy who hasn’t fought in 3.5 years. Cejudo is an animal. He has Olympic level wrestling and legit striking, which has vastly improved each fight it seems. Cejudo is just so quick and with legit pop and his confidence growing, we could be in for the long Cejudo era.

However, I’m going on a whim here and picking Cruz. The lay-off isn’t a big deal to me, as he’s been there and done that. I know it wasn’t against Cejudo, but Cruz bested Takeya Mizugaki and T.J. Dillashaw after over two month lay-offs. The wrestling isn’t going to entirely be there for Cruz, as Cejudo is world class. The striking though, is where I see Cruz edging Cejudo. I believe early on, Cejudo will get the better of Cruz. As the fight wanes on though, Cruz’s footwork and cardio will start to pick apart the Champion. In the end, Cruz takes an instant classic via split decision.

265 lbs.: Francis Ngannou vs. Jairzinho Rozenstruik – It’s hard to break this fight down because either it’s a staring contest for three rounds or in the first minute somebody is out cold. I’m going with the latter. I believe while Rozenstruik is scary and has great kickboxing, Ngannou is just another type of scary. A man with the most ridiculous power in mma. Some say, Alistair Overeem’s head is still in orbit. So with that, I have Ngannou winning via knockout.

145 lbs.: Jeremy Stephens vs. Calvin Kattar – I’m really bummed Stephens missed weight, but it should be an entertaining fight no less. Stephens is every sense of the word veteran. He’s gritty, well rounded and dam right scary. With power from the heavens, Stephens is tough out for anyone. However, Kattar is savage. It can be noted, Kattar has some best striking in the division period. With good footwork, cardio and technique, Kattar is of Championship merit. If you rewatch his last fight against Zabit Magomedsharipov, that third round was all Kattar. If that were a five round fight, Kattar is probably fighting Brian Ortega or the Korean Zombie in a number one contenders fight.

Anyways, I believe Kattar is going to out-strike and out technique Stephens for three rounds. I could see a late finish, but Stephens is durable, so let’s just say Kattar via decision.

170 lbs.: Donald Cerrone vs. Anthony Pettis – This is a rematch and I think perfect matchmaking. Cerrone has lost three fights in a row, meanwhile Pettis has dropped three of his last four. A win is crucial her for both gentlemen, as their inconsistencies have caught up to them. As for a prediction, I’ve got Cowboy. When he’s on, he’s a world beater. When he’s off, it’s practically over.

However, this will be his first fight since being handled by Conor McGregor. Given the build up and what went down, Cerrone no doubts wants to erase that night from the memory bank. If I’m being honest, what happened was sad and embarrassing in a way. I’m not sold Cerrone is done just yet, and a I think if he wants to keep fighting names, he’s got to start turning it on now. So with that, I have Cerrone winning via decision.

265 lbs.: Fabricio Werdum vs. Aleksei Oleinik – I’m interested in this fight, but only if it hits the ground. Werdum is miles above Oleinik in the striking department. I mean, Oleinik shows zero striking technique, often throwing looping overhands in order to get inside and grapple. Given Werdum’s lay-off, it might work, but I don’t see it. I see Werdum dropping Oleinik several times and TKO’n him on the ground. I will say though, I hope we see some grappling here. Both men are exceptional.

115 lbs.: Carla Esparza vs. Michelle Waterson – While Waterson has vastly improved, I do feel at times she is undersized. Esparza is a solid Strawweight, with a perfect base and exceptional wrestling. She is also a smart fighter, whom is a willing striker in moments. Esparza can embrace the brawl, but does so when her opponent is clearly more gassed then her. I think when all is said, Esparza’s wrestling earns her a clear cut decision victory.

170 lbs.: Vicente Luque vs. Niko Price – Honestly, anything fancy happen in this fight. Both men have the power and finishing instinct to knockout anyone on any given day. However, I believe Luque is the better striker and has the durability factor. Price has been finished several times, including to Luque. Make twice to Luque, as the Brazilian walks away with a TKO victory.

145 lbs: Bryce Mitchell vs. Charles Rosa – Fun fight, but Thug Nasty is on the rise. I just feel this fight is going to be grappling heavy, in which I favor Mitchell. I mean, Rosa is a stud. He came off a near 30 month layoff to submit a submission wiz and rising prospect in Manny Bermudez. However, I feel like if he can’t keep Mitchell from clinching, then his high work rate striking isn’t going to edge him out the rounds. So with that, on the heels of his grappling, I’m siding with Mitchell via decision.

185 lbs.: Sam Alvey vs. Ryan Spann – Alvey is on a three fight skid, in which he has suffered two stoppages. Meanwhile, Spann has won seven fights in a row, three of which are in the UFC and the last two being stoppages. Think this is clear cut, Spann controls the fight wherever it goes and ultimately stops Alvey via TKO.