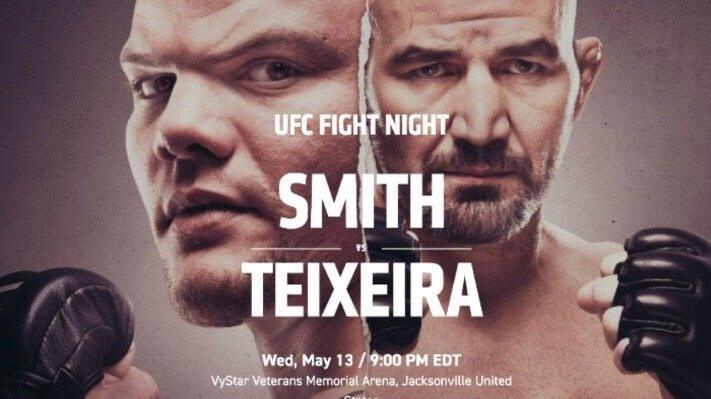 After a hell of a UFC 249 card, the UFC is back action four days later with an action packed Fight Night. The card is headlined by two title contenders in Anthony Smith and Glover Teixeira. Both men eager to get a second crack at Jon Jones, will first have to square off in an all important fight. The winner undoubtedly will be in the mix, and perhaps one fight away from another title shot. If there is anything to say about this fight, both men are finishers and there is no way this goes the full five.

205 lbs.: Anthony Smith vs. Glover Teixeira – This is an excellent main event and one in which the winner most likely finds themselves in a number one contenders fight next. For Smith, the move up to Light Heavyweight has been a great choice. A 4-1 record, with four finishes over some big names like Alexander Gustafsson. Throw in a title fight against Jon Jones, in which he went the full five with the champ. For Teixeira, the 40 year old has strung together three straight victories, two via finish. Perhaps many have written off the former title challenger, but he clearly is still fighting for another chance at the belt.

As for a prediction, I’ve got Teixeira. While Smith has youth and confidence on his side, his slow starts worry me. He is the comeback king and his nickname of Lionheart could never be more true. In adversity, the man weathers the storm and fights through what others would fold too. Teixeira though, while losing his speed still packs a punch, has a solid chin and is grappling wizard. He’s already staged off retirement and young lions before, why not one more. So with that, I believe Teixeira will come out early with heavy shots that drop Smith. A shaken Smith then will succumb to Teixeira’s excellent submissions.

265 lbs.: Ben Rothwell vs. Ovince Saint Preux – Gosh this is a tough fight to pick. Rothwell is a natural Heavyweight with legit power and a sneaky standing submission game. He however has looked iffy in his last three fights since returning from a three year layoff. OSP is moving up from Light Heavyweight and I can’t help but to wonder what his cardio will look like now. OSP has relied on his athleticism on the feet, and his submissions have been his bread and butter.

As for a prediction, I have OSP. I believe his athleticism on the feet should aide him against a somewhat slow Rothwell. In the end, I see OSP walking away with a decision victory.

155 lbs.: Drew Dober vs. Alexander Hernandez – This is the best fight on the card. Dober has really come into his own, showing legit knockout power to already go with his volume striking. Dober’s last fight, a knockout victory over Nasrat Haqparast really caught some eyes. As long as Dober can keep the fight upright, his chin combined with his cardio and striking can go a long way in this division.

As for Hernandez, two big UFC wins opened up his tenure with a bang. A call out and verbal attack on Donald Cerrone turned into an excellent fight that ended in a TKO defeat for Hernandez. However, “The Great” bounced back with a tough win over Francisco Trinaldo. He features power in his hands and solid wrestling.

As for a prediction, if Hernandez can impose his wrestling on Dober and negate his striking, then I see a route to victory. If Hernandez fails to get this fight to the mat, Dober is going to piece him up and the later this fight goes, a tired Hernandez will succumb to Dober via TKO.

135 lbs.: Ray Borg vs. Ricky Simon – Borg is an excellent grappler and a real iffy striker. At Flyweight, he’s a contender. At bantamweight, I fear he’s too small for most of the division. Simon is a workhorse. He’s a pressure fighter whom uses his striking to set up his wrestling. Which is his bread and butter.

Over Simon’s last three UFC wins, he’s landed 17 takedowns. Borg too is a wrestler, landing 23 takedowns in his last three fights. Problem is, Borg gets taken down 50% of the time. Simon holds his own at 71%. Throw in the fact that Simon is a natural bantamweight and Borg is not, and the weight advantage should aid Simon in the wrestling department. When all is said, Simon wins this via decision.

265 lbs.: Andrei Arlovski vs. Philipe Lins – Arlovski is a legend and I will admit, his ability to avoid getting hit has improved. In the past, his chin was problematic. However, a change of fighting styles mixed in with wrestling has aided his ability to avoid that dreaded fight ending shot and win some decisions.

This fight though, I feel like he can win with wrestling. However, knowing Arlovski, he will strike long enough to get caught by a very dangerous and confident striker in the debuting Philipe Lins. We’ll shall see though what Arlovski shows up, but I’ve got Lin’s winning this via TKO.

155 lbs.: Michael Johnson vs. Thiago Moises – I’m not sure what has happened to Johnson lately, but this just seems like a fight he loses. Moises has some striking chops, but is talented grappler. If he can takedown Johnson, he’ll be able to control him and potentially submit him.

And while I should pick Moises based on this, I got Johnson. He’s back at Lightweight, so that dreaded Featherweight cut is done with. His striking is some of the best, especially when he pressures his foe. If he can get back to how he fought Edson Barboza, then this would be a wrap. Anyways, I’ll take Johnson via decision.

135 lbs.: Sijara Eubanks vs. Sarah Moras- Eubanks has been so inconsistent for someone so gifted. This particular fight she should dominate and finish Moras, but will she finally rise to the occasion? We’ll see. For now, I’ll go with Eubanks winning via decision.

155 lbs.: Gabriel Benitez vs. Omar Morales – I haven’t seen enough of Morales, but the consensus is that he takes this fight. I however am going with Benitez, whom has vast UFC experience against some tough foes. Think he takes this via decision.

145 lbs.: Hunter Azure vs. Brian Kelleher – While Azure faired well in his debut against a tough Brad Katona, I feel as if this next step in Kelleher is a tricky fight. Kelleher is a pressure fighter, whom brings forth volume striking and a sneaky guillotine choke. Azure is more of a patient striker whom will throw looping strikes. He’s got pretty good takedown defense to boot. In what I expect to be a tight fight, I’ll take Kelleher’s experience and volume in a decision victory.

265 lbs.: Chase Sherman vs. Ike Villanueva – While Sherman had a rough first UFC stint, he’s back for a second go after rebounding on the regional scene. He’s tasked with a debuting slugger in Villanueva. I favor Sherman. He’s more technical, and he’s a natural Heavyweight. Villanueva fought as low as Middleweight. While he has experience against Heavyweights, I’m not sure he’s ready for the power Sherman carries. So with that, I have Sherman winning via knockout.